After you have sent a campaign, the next step is to start tracking the results. ContactPigeon's campaign dashboard provides an overview of campaign performance through key metrics, such as delivery rate, open and clicks. Furthermore, ContactPigeon tracks what happens after someone opens or clicks on the email including his or her web activity, products viewed, check out and attributed revenue from the order triggered by the campaign.

This article provides a navigation guide on how to find the campaign results. To understand the key metrics for a campaign, read Key Campaign Metrics Defined.

The Homepage of ContactPigeon platform presents an overview of recent campaigns and activities. 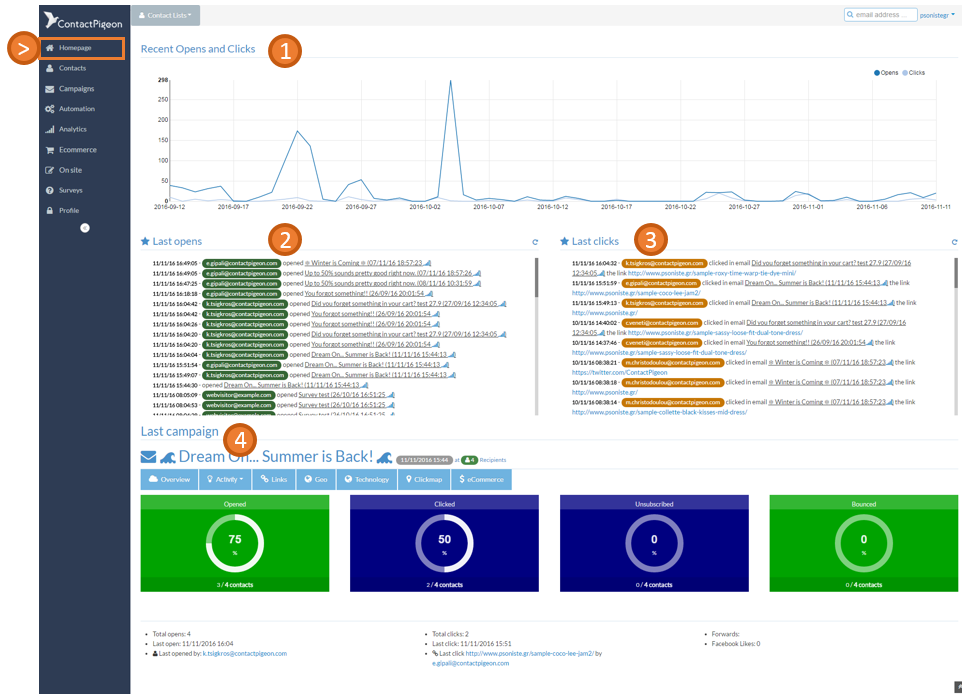 1
Timeline view of recent Opens & Clicks shows the daily count of opens and clicks for all of your sent campaigns for the past 60 days. Mouse over the graph to see the detailed count by day.
2
Last opens reflect a stream of contacts who recently opened campaigns, the time-stamp of the action, and the time stamp when the campaign was sent. You can click on each of contact email address or the campaign to see further details.
3
Last clicks reflect the stream of contacts who recently clicked within a campaign email. Each line shows the contact, campaign, link URL that was clicked as well as the corresponding time-stamp for the action.
4
Last campaign shows a summary dashboard of the most recent campaign. Refer to Key Campaign Metrics Defined on how to read each metrics.

The campaign dashboard presents detailed performance results from a single campaign. There is a couple of ways to access it.

A. Total contact lists. Once you place the sensor on the blue dot, you have the chance to see which contact lists the campaign was sent to.

On the Overview tab, you will find the key campaign metrics that summarize the performance of the campaign. 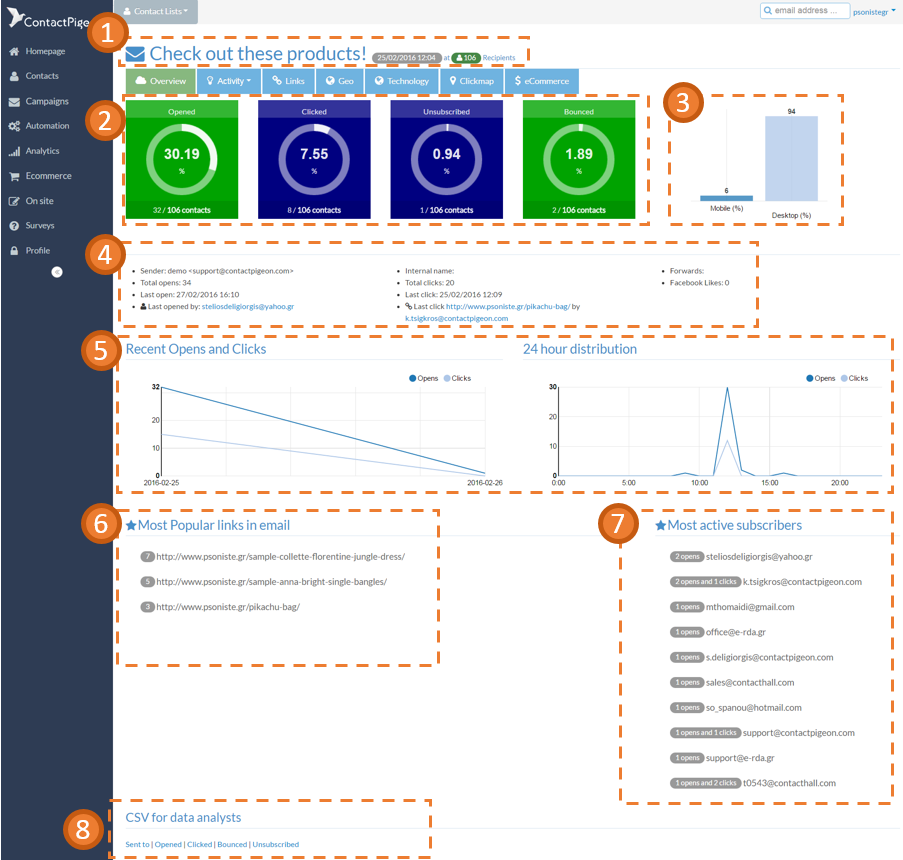 1
Campaign name, delivery time-stamp, the total number of target recipients. You can click on the recipients to see the full contact list.
2
Presents the key metrics including: Open rate, Click rate, Unsubscribes, and Bounces.  Refer to Key Campaign Metrics Defined on how to read each metrics.
3
Percentage of recipients who open the email on a mobile device vs. desktop.
4
Detailed campaign info that includes: Total number of opens, clicks, forwards and Facebook likes (if social interaction is enabled).
5
Recent Opens and Clicks show a timeline view of the number of opens and clicks. 24-hour distribution reflects the volume of open and clicks over a 24 hour period. This chart provides insights into the optimal time to schedule campaigns in order to maximize open rates.
6
Most Popular links in email show, in descending order, the number of clicks for all the links within the campaign
7
Most active subscribers chart lists the top 10 recipients based on activities (open and clicks).
8
Campaign results can be exported in CSV format. Click on the metrics link to download the list of contacts who fulfilled the corresponding action.

The Activity tab provides quick access to the list of contacts who have been Sent, Opened, Clicked on the campaign. Similarly, you can find the list of emails who have opted to Unsubscribe or Bounced (soft and hard bounces combined).

The Links tab provides a summary of the all the URL links within the campaign and the corresponding number of clicks for each.

The Geo tab provides insights into the geographical location of your recipients. The location is generated based on the user IP address. This info is tracked for both Opens and Clicks. 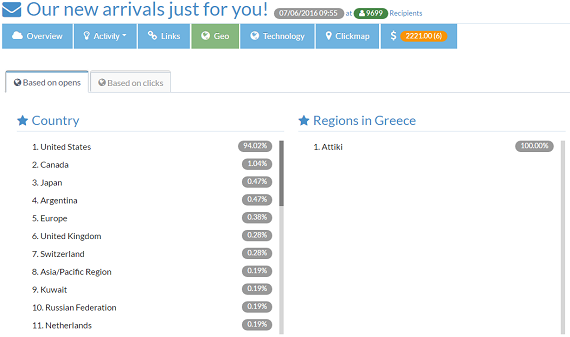 The Technology tab displays the percentage distribution device type used to open and click on the campaign. The statistics not only distinct between desktop and mobile, but also the general operating system each type runs on. This provides great insights into your recipient's reading habits, in order to optimize your future campaign design, catering to the most popular device type for your target audience.

The Clickmap provides a visual map of the distribution of URL clicked within the email template. This feature is extremely helpful for optimizing campaign design. Combined with AB testing, you can use Clickmap to quickly assess the correlation of click-rate based to the overall design, position, and text of the Call-to-action buttons within the email. 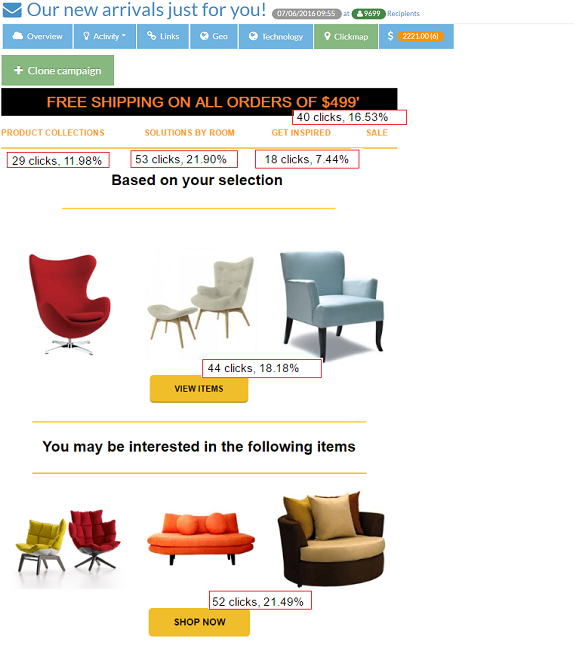 Lastly, the eCommerce tab provides an overview of the total revenue attributed to the campaign. The revenues are attributed to a campaign in two ways: